Has it ever happened to you that you’re ready to write an important document only to find out the marker is dried out?

It is a common occurrence that has happened to all of us, precisely in the most inconvenient times. If it hasn’t happened to you, then chances are it will sooner or later, and you must be ready to act quickly.

Fortunately, that is the main topic for this wordy piece. Here, we’ll explore the different substances that can fix a dried out marker, and how to use them properly to achieve that goal.

So, gather as much dried out markers as you have lying around the house. Today, we’ll make them work again.

Water comes once again to breathe new life back into tools that don’t seem to function anymore. It works like a charm to get dried out markers back to functioning without issues. To do it, follow the next instructions:

Getting A Bowl of Water

​Fill a small bowl with water. The water’s temperature could be hot or warm. At a rather high temperature, the water soaks the marker’s tip, which get dried out after a certain amount of use. This process allows the ink to flow again.

​Keep in mind that cold water could work too. But you should use a warm or hot temperature because it works faster diffusing the ink.

Putting the Tip in the Water

​Get the caps off the dried markers. Then, put them in the water until the tips are deep in it. Let it be for five minutes to soak in. Don’t worry if a portion of the ink starts draining from the marker tips into the water. That is completely normal.

​Now, take the markers out of the water. Using a rag will remove the excess water remaining on the tips. Then, put the markers over the rag, and wait for it to dry.

Check the markers from time to time. They will be ready once the ink at the tips is water-free. Don’t let them dry too much though, or they might lose the capacity to write.

This process might take some time, and you need to keep track of it. You can do it by using the markers over a piece of paper every couple of hours.

Also, remember that the marker might leave ink over the surface where you put it. These stains might be difficult to remove, so it is better to avoid laying the markers on clothing or towels.

After drying and checking they can write, replacing the caps is a good idea. Make sure to put the caps back on the marker after every use to avoid drying out the tip again.

BONUS: Injecting Water in the Marker 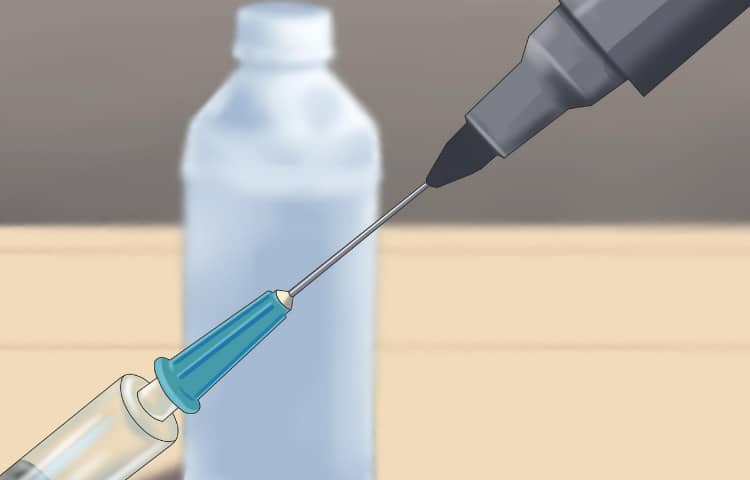 Another possible solution is to inject water in the marker. Use a long and sharp syringe, the skinniest you can find, and fill it with water. Then, put the needle through the tip, right in the marker body.

Push only a small amount of water at a time, which will allow the air to drain out while adding the water. It will need one milliliter, approximately. Then, allow the marker to rest and dry. 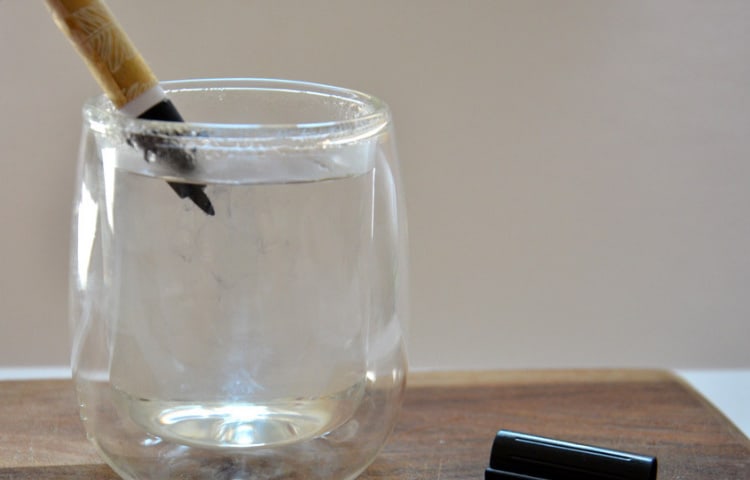 Another effective method to fix dried out markers is rubbing alcohol. It is an easy process that doesn’t require much effort or thought.

So, how does it work?

Pour a small amount of rubbing alcohol directly into a small container, like the rubbing alcohol cap. Then, let the marker’s tip soak in it until the ink starts swirling out.

After that, put the cap of the marker over it again. Let it rest with the tip-side up, and wait from 24 to 48 hours.

When the time is up, the marker should be working once again, ready to write and draw as you please.

BONUS: ​Injecting ​Alcohol in the Marker

Like in the previous method using water, you can inject either alcohol or acetone in the marker, and it is likely that it will work again. Using a milliliter of rubbing alcohol should be enough.

Ethanol is a strong solvent that works for many different things, dried out markers being one of those. Follow the next steps.

Start by pulling out the marker nib, and pour ethanol inside the marker. Using a pipette or a syringe works efficiently to complete this step.

Then, when you finish adding the solvent, put the nib in the marker once again.

Let it rest for a couple of minutes and try making some lines with the marker. Ethanol is quite powerful, meaning that if there’s any ink left in the marker, it will be flowing and ready to use quickly. Overall, this method is one of the quickest you could try.

Vinegar could work to get the ink flowing back again too. It is a household substance that everyone has available, making it an affordable method to fix the markers.

Put the marker with the tip down in a recipient, like a dry bowl. Then, dampen the marker tip using two drops of white vinegar. Let the marker soak a couple of minutes before drying.

Don’t let the marker tip get too far deep in the vinegar. A small amount of vinegar, like a couple of drops, should be enough.

The main goal of the article was to teach you how to use common elements, like water and alcohol, to fix the dried-out markers that seem like they have no more use.

Before making a fast decision and throwing them out, you might want to try one of the methods listed above first.

Related Content: How to Revive Gel Pens That Doesn’t Work

Hi there! I’m Eva, artist, designer, photographer and mom of three little gentlemen altogether. When I’m not playing with my kids, you’ll find me researching and writing for ChooseMarker.

link to How to Draw a Lime Easy Step by Step

Lime is a juicy fruit that can add a zesty flavor to any dish. Don't you think it can also be a great addition to your sketchbook? If yes, then let's begin the tutorial on how to draw a lime step by...

After removing an adhesive from the vinyl surface, you might think the job is done. But often, there's an annoying sticky residue left behind! It can be hard to remove, and if you're tempted to...

We’re here very passionate to do drawing. We all are professional and we know more than most of them. Here, we do honest reviews to choose the best art supplies and provide tips to become a great artist. Stay on, Have fun!

ChooseMarker.com is a participant in the Amazon Services LLC Associates Program, an affiliate advertising program designed to provide a means for sites to earn advertising fees by advertising and linking to Amazon.com.